Origins of Korean Food in London

Origins of Korean Food in London

During the past year, there has been a tremendous influx of Korean food in London. Restaurants all over the city are now occupied by new Korean operators. The established restaurants are competing with new Korean ideas and food trends. According to the most recent estimate, there are now approximately 100 new Korean restaurants throughout London.

The reason for the success of Korean food in London is because the food is both exotic and familiar. YORI offers steamed buns with a pork filling incredibly popular with anyone who loves Dim Sum. London has become obsessed with the restaurants twist for Korean fried chicken. The value of the food industry in the United Kingdom was £29.4bn last year. The most popular choices were Thai and Chinese food. The expectation is Korean food will become increasingly influential as awareness of Korean culture within the United Kingdom grows.

Not only has Korean food become popular within the fast-food market, but it is also in the ideal position for a more formal service.

The presence of South Koreans began increasing in the 1970s with New Maiden. Kingston now has a Korean population of 20,000. The area is often referred to as Little Seoul, but this is far from the only area where Korean restaurants have started to appear. One of the most popular areas for new restaurant trends is Soho. The area now offers a Korean chain called Bibimbap in the heart of Soho on both Greek Street and Charlotte Street in addition to Jinjuu. Bao is nearby, offering braised pork fillings served with milk-steamed buns.

Another popular area for Korean restaurants is the East End. New restaurants have opened from Dalston to London Bridge. As the most recent opening in Leadenhall, Bibimbap joined both Bao and Jubo On the Bap. Bao is located by Broadway Market at Netilk Market. The new stall is open on Saturdays, and Jubo is found in the East. Jinju offers a food created to be enjoyed while drinking called Anju. In addition to these small plates, the restaurant offers traditional Korean dishes including Mandoo meat dumplings.

Some of the other popular dishes include platters of fish and meat prepared using traditional Korean flavours. A Korean steak called Yook-Hwe is prepared with pine nuts and peach. In Brixton Market, Wishbone has become popular for Korean chicken wings. In Notting Hill, the place to be is Dock Kitchen. A Korean menu was offered in February consisting of raw beef with sesame and raw egg, sea urchin and leaf-wrapped pork and oysters served with chilli and fish sauces. The chef at Smokehouse prepares Korean marmalades for slow cooking enticing smoked slabs of meat.

Bimimpab provides a traditional Korean dining experience in Soho. The restaurant offers ten different versions of samples of one-pot comfort food Bimimpab has become famous for. Old Street’s On the Bab is found just a little to the east. The restaurant was founded last year by the same person starting both the higher-end Nizuni and Koba a few years ago in the West End. Anju-style food is served at On the Bab including pa jeon. The spring onion pancakes are served with beer or seafood.

The most popular spirit in Korea is Soju. Jubo is just around the corner from On the Bab. The residents of London have made the restaurant’s fried chicken with a rice dish called kimchi bokkeumbap very popular.

The Most Popular Korean Foods in London

Korean BBQ: One of the most popular Korean dishes is thinly sliced beef, chicken or pork served in a wide variety of Korean spices and sauces including chilli, garlic, sesame oil and soy sauce. The dish is served raw. Each individual diner decides how long they want to cook their meat using a grill either placed onto the table or actually built-in. The dish is popular due to the explosive flavours and sensational experience, extremely delicious, incredibly satisfying and definitely hands-on.

Budae Jjigae: This dish is still a fairly new Korean delicacy in London. The translation of budae jjigae in Korean is army base stew. The Korean War was from 1950 until 1953. After the war, food was scarce. When the troops from the United States left Korea to go home, they left a lot of American food behind. This included hot dogs, spam, ham, baked beans and a wide range of processed foods.

The local Koreans used the food by adding onions and kimchi. American food then became a tasty Korean stew. The dish has remained popular with the addition of newer ingredients including sausage, ground beef, bacon. macaroni, mushrooms, peppers and mozzarella. Although Budae Jjigae is not one of the healthier Korean dishes, popularity for this creation has spread all over London.

Kimchi: Kimchi is an incredibly large part of the cuisine from South Korea. Nearly every meal includes a side dish of kimchi. The dish is prepared using fermented and salted cabbage prior to being seasoned with ground red pepper, ginger and garlic. In addition to being very flavourful and spicy, kimchi is actually beneficial for health. The Korean side dish contains a lot of good bacteria and vitamins beneficial for digestion. According to some studies, kimchi is a good anti-carcinogenic.

The average individual in South Korea consumes approximately 40 pounds of kimchi per year. To put this fact into a proper perspective, 40 pounds is the average weight of both a baboon and a gazelle. Kimchi has become almost as popular in London as it is in South Korea.

Bulgogi: In Korean, Bulgogi means fire meat. The dish is prepared with thin slices of beef or pork marinated in a mixture containing pepper, soy sauce, garlic, sesame oil and sugar. A charcoal barbeque is used to grill the slices of mear prior to being served with green onions and sesame seeds in a stir fry. Bulgogi is an extremely popular Korean dish.

Hotteok: Hotteok is Korean street food. The snack is similar to a pancake with a sweet filling. The dish is prepared using a dough containing wheat flour, yeast, sugar, water and milk. Hotteok is especially popular during the winter months. This is one of the most popular street foods in Korea. Chinese immigrants introduced the food towards the beginning of the 20th century. The most popular version is sweet, although there are savoury versions as well including bulgogi, kimchi and cheese flavours.

Naenmgyeon: Naenmgyeon originated in South Korea. Noodles made from either potato starch or buckwheat are served with diced vegetables and eggs in a vinegary, chilled broth. Naenmgyeon is one of the Korean dishes that does not sound tasty but is absolutely delicious. The dish is eaten when the weather is hot as a way of cooling off. The meal is filling, fast, healthy and very popular in both Korea and London.

Tteokbokki: Tteokbokki is one of the most popular Korean Street food snacks. Preparing the dish is a well known linguistic nightmare. The reason is the dish is made using numerous lengthy, cylindrical rice cakes as opposed to grains of rice. The snack rests in a sweet chilli sauce. There are stalls selling nothing but this particular dish. In most cases, extras are included such as seafood, noodles, fish cakes and ribs.

Bibimbap: The rice-based dish was named after the Korean word for rice, bap. The dish includes assorted vegetables and is extremely versatile. Bibimbap can be served with an incredibly large variety of different ingredients. The traditional version of the dish is prepared using thinly sliced beef, a raw egg yolk and seasoned and sauteed vegetables. The vegetables most often used include courgette, mushrooms, spinach, cucumber, cabbage, radish and soybeans. The dish is healthy with a beautiful appearance.

Samgye-Tang: Despite the vast miles between Korea and London, most people want the same food when they are not feeling well, chicken soup. Poor Koreans have relied on samgye-tang for centuries for the nutritional value. The dish has a brothy goodness in addition to numerous medicinal ingredients such as perilla seeds, sanghwang mushroom, jujubes and ginseng. The majority of Koreans enjoy the dish during the heat of the summer to help combat different seasonal ailments such as summer colds and hayfever.

Pajeon: Pajeon is a pancake-like food originating in South Korea. The main ingredient of the snack food is green onions. The batter is prepared with flour, wheat and eggs prior to being poured into a hot pan over green onions. There are a lot of different versions of this popular Korean dish. 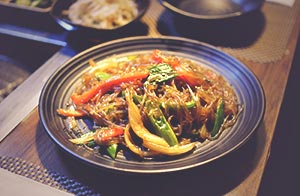 We use only the finest ingredients to produce stellar tastes.